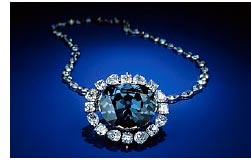 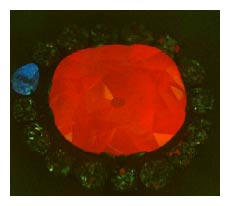 The Hope Diamond emits a red phosphorescence after being bombarded with ultraviolet light.
(Photo by John Nels Hatleberg)

The diamond is one of the greatest minerals ever discovered. One very unique diamond is the Hope Diamond. The Hope Diamond has a long past because it was passed down and sold so many times. A diamond is a hard form of carbon that is valued as a precious gem and it is used for jewelry, and as a cutting tool blade.

The beauty of the Hope Diamond has drawn many people to the Smithsonian to see it, where it sits up front in the museum, making people want to see the rest of the collection. The Hope diamond ‘s unique characteristics are easy to recognize even though so many people owned and cut it. The Hope Diamond is beautiful and has a phenomenal history as a remarkable mineral.

For permission to reprint this article, contact us at info@chicagorocks.org.