Pu`u Loa Petroglyph Field on the Island of Hawaii

This year in August, my family went to Hawaii. When people hear the word “Hawaii” they think about a flourishing tropical paradise. However, on the Big Island, the area around the town of Hilo has 3 volcanoes and lots of lava flows. In Volcanoes National Park, at the end of Chain of Craters Road, is the .7 mile hike to the Pu`u Loa Petroglyph Field. A petroglyph is a carving in rock. In Hawaii, there are 2 different types of lava, `a`a and pahoehoe. They are different because of their crystal formation, gas bubble content, and temperature. Pahoehoe is smooth and `a`a is rough. Petroglyphs in Hawaii are carved in pahoehoe. The petroglyphs help us learn about the ancient native Hawaiians because the carvings show part of the lifestyle of Hawaiians.

Pu`u Loa (hill of long life) has the largest collection of petroglyphs in Hawaii and are carved into 400-700 year old lava flow crust. This petroglyph field has over 23,000 carvings. They are a record of the history of the native Hawaiian people. People came to this sacred site to bless their children. They thought this site had a spiritual guiding energy.

People carved petroglyphs in different ways. Pecking, bruising, and abrading are 3 techniques. Pecking is hammering with a pebble. Bruising is scraping the surface. Abrading is hammering and cutting the lava rock. The Hawaiians made adaptations to the way they made petroglyphs when the land changed. They used different procedures for carving.

There are many interpretations of the meaning of a petroglyph. They tell stories of something that happened to someone. At this site, there are carvings of humans, animal, and canoes. These are 2 that I saw at Pu`u Loa. 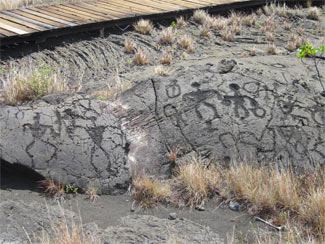 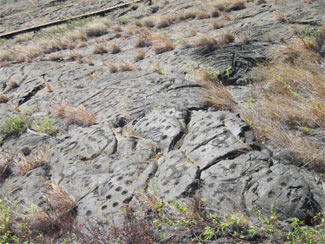 Left: These are petroglyphs of people and dancers with a gourd.
Right: 16,000 petroglyphs are Pukas (holes) which holds a child’s Piko (umbilical cord). Every Puka is unique. There are many styles (usually shapes). These connect generations of Hawaiian families throughout the timeline.

The native Hawaiians seemed to be intentional with the pattern design of their petroglyphs. Some petroglyphs represent 1 person; however, some show a line of marching people and dancers. They might have used multiple petroglyphs to show a bigger event. At first I was confused about the meanings of the petroglyphs. After I researched this site, I thought it was more interesting because I understood it better. If you like history, you will like Pu`u Loa.

For permission to reprint this article, contact us at info@chicagorocks.org.